Are Banana Spiders Poisonous? What You Need to Know 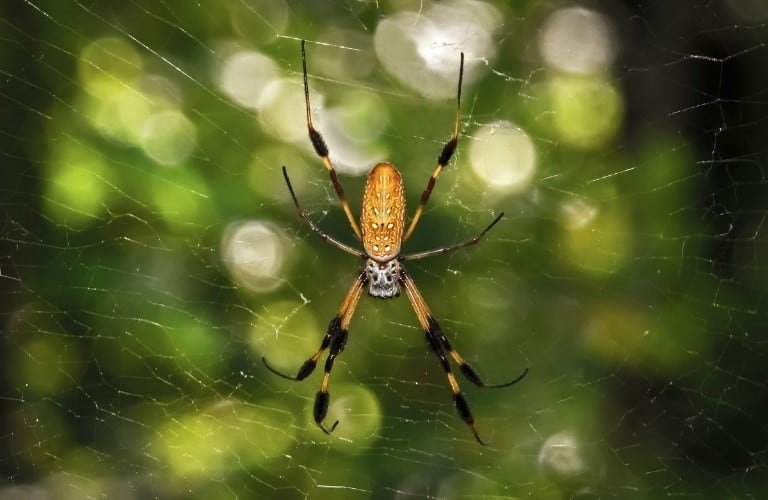 Seeing a large, yellow spider in the woods can be pretty intimidating, especially if you look closely and realize that the spider is resting on a huge, 6-foot-wide web!

Looks can be deceiving, however, and you probably don’t need to be as worried about the North American banana spider as you think.

Are banana spiders poisonous? Like most spiders, banana spiders do possess a certain amount of venom used to stun or kill their prey. The venom, however, is not potent enough to inflict great pain in humans. A bite may produce mild discomfort, though typically less than that of a bee sting.

It’s perfectly normal to feel a jolt of fear whenever you run across a large spider like the banana spider.

If you can calm your racing heart long enough to take a close look at these interesting creatures, you’ll find that they are actually quite beautiful in their own unique way.

In the following, you’ll learn how fascinating they are as you gain a new appreciation for these brightly colored arachnids.

Be sure to check out all of our spider prevention tips, elimination guides, and recommended products. Click here for more spider info.

What Are Banana Spiders?

Like all spiders, banana spiders are classified as arachnids – not insects as many people assume.

(Discover the key differences between insects and arachnid here.)

Banana spiders are sexually dimorphic, which means the male and female differ significantly in appearance and behavior.

The male banana spider is plain brown in color and grows to less than half an inch long.

Because it is not as big or colorful as its female counterpart, you might not have ever noticed it.

The female banana spider, on the other hand, can grow to be 1 to 3 inches in body length.

Including their legs, some females have been measured at 5 inches in diameter! 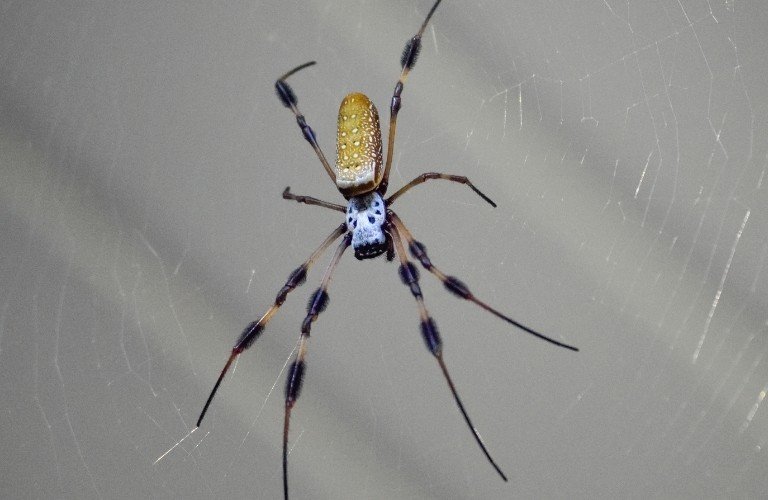 Females have a spotted orange, yellow, or tan abdomen. Their legs have alternating yellow or orange and brown bands.

Three pairs of their legs are long and thin, while the fourth pair is significantly shorter.

Their legs are built not for speed but to spin webs, with tips that point inward instead of outward.

Because this means they are not as fast as some of their predators, they use their bright colors to frighten potential enemies.

This is necessary because their venom is not particularly powerful.

Though it is potent enough to stun or kill prey, it is not enough to harm a banana spider’s larger enemies, such as humans.

You might notice that female banana spiders build large, intricate webs to trap their food. These webs can reach 6 feet or more in diameter if left undisturbed.

Females have the ability to change the color of their webs, giving them a yellow tint to match the sunshine of the current location. This makes the webs less noticeable to their prey.

If you’re dealing with an abundance of webs in your garage or shed, you’ll find easy web removal and cleaning tips here.

Are Banana Spiders Dangerous to Humans?

Like almost all spiders, banana spiders have some amount of venom. They use this to stun or kill their prey once it is wrapped up in their web.

This amount of venom is not enough to fatally harm a human, unless the human has a pre-existing condition that leaves them susceptible to it.

For most people, a banana spider bite feels very similar to a bee sting but is often less painful. It might swell up slightly or might even blister, and the bite area will be red or pink.

A banana spider bite typically subsides within a few days, however.

Applying a cool compress, keeping the area clean, and perhaps treating the bite with an anti-inflammatory, itch-relieving cream or an all-natural after-bite balm will help alleviate any symptoms.

It is more accurate to say that spiders are venomous rather than poisonous.

Something is venomous when it injects toxins via a bite or sting. Something is poisonous, however, when it releases toxins upon being touched or eaten.

For instance, a poison dart frog is thus named because its toxins are on the outside and are dangerous when touched or ingested.

A harmful snake, on the other hand, is venomous, because its danger comes when it bites its victim.

Banana spiders do not typically bite predators (in this case, humans) unless provoked incessantly. A banana spider will not attack you in your sleep and bite you.

If you intentionally poke at the spider and do not allow it to escape, it might resort to biting you.

If you accidentally walk into their web, step near one, or rest your hand on a tree nearby, the spider will likely run away or ignore you entirely.

This is generally true of most spiders you may encounter, including the feared black widow. (Learn exactly what to do when you find a black widow spider in this article.)

Where Do Banana Spiders Live?

Banana spiders prefer warm regions with high humidity. Though they themselves do not need lots of moisture, their prey needs plenty of water to survive.

As with most spiders, their tolerance and hardiness allow them to live wherever their prey can be found most plentifully.

In the United States, Florida and the other Gulf states have high banana spider populations. Some banana spiders can be found in eastern Texas.

They make their homes in areas with heavy vegetation with which to connect their webs, and through which plenty of insects will jump or fly.

This means they can be found in heavily forested or swampy, marsh-like areas.

On the other hand, however, these spiders like urban areas where there is plenty of food and artificial light, both of which attract their prey.

If you’re finding more spiders than you care to admit, whether they are banana spiders or another species, our Complete Elimination Guide will help you eliminate the problem.

How Long Do Banana Spiders Live?

A typical banana spider only lives for a few months, depending upon food availability and climate.

Unlike many species of spiders, the banana spider does not reproduce frequently. In fact, female banana spiders only produce offspring once a year.

The male banana spider makes a plucking sound to signal that he is a potential sexual partner, not prey.

The female, after being inseminated, spins two egg sacs about an inch wide. Each sac is made with yellow silk and holds hundreds of eggs.

After this interaction, the male banana spider lives for two to three more weeks, while the female lives up to a month longer.

What Is the Most Poisonous Spider in the World?

The most poisonous (or venomous, as has already been discussed) spider in the world is widely considered to be the Sydney funnel web spider.

This arachnid can be found in Sydney, Australia and has fangs strong enough to pierce leather or a fingernail.

They are surprisingly small, only a couple of inches across, and earned their name by building funnel shaped webs in holes underground.

Though the venom from this spider is the most dangerous to humans, it has little effect on rabbits and some other small mammals.

Unlike many spiders, the Sydney funnel web spider is aggressive and often prefers biting instead of running away.

This, in addition to its highly potent venom, is what makes this spider so dangerous to humans.

What Household Spiders Are Most Dangerous?

There are two main types of spiders that you might find in your home in North America that are considered dangerous because of their venom and/or aggression.

You can head over to our article on dangerous Midwest spiders to learn more about the following two venomous spiders.

Like its name suggests, the brown recluse spider is completely brown in color. It is found in many homes and can be recognized by the darker brown violin shape on its back.

You might see them in closets, firewood stacks, basements, or dry leaf piles.

Because it doesn’t like to be disturbed, the brown recluse typically only bites when it feels threatened.

These bites are immediately painful but can take up to three hours to show themselves.

The venom kills the skin around the bite and creates a painful sore. Healing can take up to a few weeks.

The black widow spider can be found internationally and is identified by the bright red hourglass figure on the bottom of the abdomen.

The rest of the body and legs are black, and they are between 1 and 2 inches long.

Female black widows are protective over their egg sacs and will bite when threatened. You can feel a bite instantly, and fever, nausea, and sweating appear almost immediately.

Perhaps you’ve been told that hairspray is the best way to kill black widows.

Hairspray will indeed kill many types of spiders, and this method allows you to keep your distance to stay safe. We explain why hairspray may become your weapon of choice in this article.

Banana spiders might look scary, but are relatively harmless unless they have been triggered relentlessly.

You can recognize the female banana spider by the yellow or orange body and brown and yellow legs or by their large, yellow-tinted webs.

Stay out of their way, live and let live, and seek medical attention if a bite is more painful or produces more swelling than a bee sting.

Head over to our spider page for comprehensive prevention guides, elimination tactics, and recommended treatment options, including the best foggers that actually kill spiders.