What’s the Difference Between Bed Bug Bites and Flea Bites? 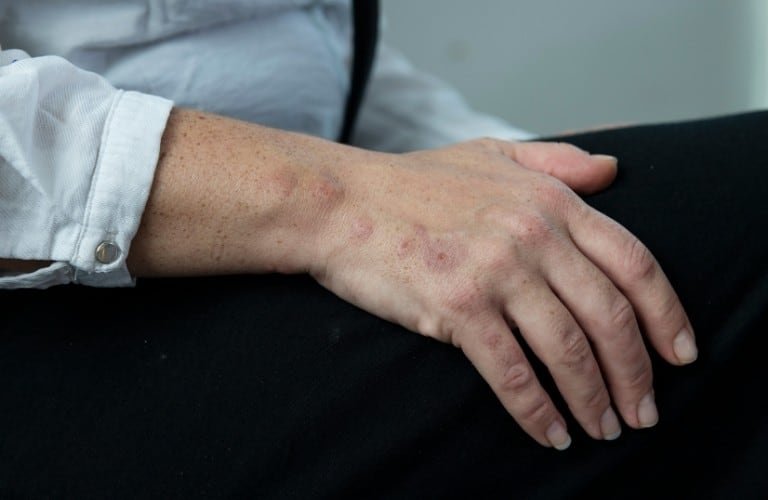 Fleas and bed bugs are often confused, given their similar appearance and blood-sucking nature. Both pests feed on blood and leave itchy, irritating welts behind.

Bed bugs and fleas are two unique, though annoying, bugs, and upon closer examination, have a wide variety of differences, including the nature of their bites.

What’s the difference between bed bug bites and flea bites? Bed bug bites most often occur during the night, are typically not detected until 12 to 48 hours later, and often appear in a straight line. Flea bites can happen at any time, can usually be felt immediately, and often appear as a cluster of bites.

While any type of bug bite on your body is a cause for concern, knowing which bug has bitten you is an important step in knowing how to treat the issue.

What Are Bed Bugs? 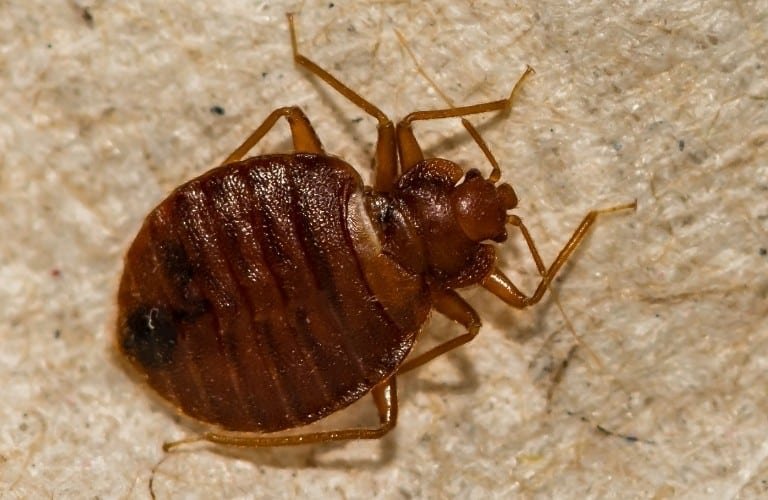 Bed bugs are insects because they have six legs and a hard exoskeleton. They are also parasitic, which means they need a host in order to survive.

There are two types of bed bugs: the common type that can be found in your home and the tropical type that is found in rain forests around the world.

Though often confused with other bugs (see list of commonly confused bugs here), adult bed bugs are brown or red in color, about the size of an apple seed, 1 to 5 millimeters in length, and are shaped like a raindrop or balloon.

Because they feed on blood from a mammal, usually a human, they make their home in places near their food source.

They are attracted to the carbon dioxide produced by humans and typically only come out under the cover of darkness.

Since they are excellent hiders and emerge while their host is sleeping, it is often difficult to see a live bed bug.

Small enough to fit anywhere in which a credit card is able to fit, bed bugs are tough to spot.

To make matters worse, bed bugs only feed every five to 10 days, meaning it is difficult to predict their movements.

When necessary, they are able to go for up to a year without eating! For this reason, it is difficult to just let them die off naturally.

For home infestations, the most recommended treatment is to use a steamer to kill them with intense heat. We show you the best of the best steamer options here.

This Costway steamer, for example, features a 1 1/2-liter tank, reaches temperatures up to 226°F, and provides uninterupted steam cleaning for as long as 40 minutes. 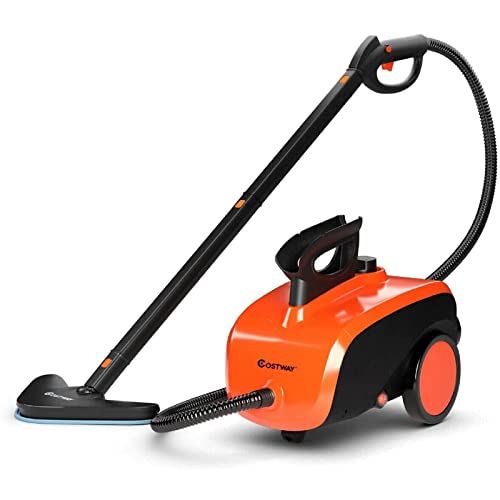 Be sure to also read our detailed guide on getting rid of bed bugs for both prevention methods and elimination techniques.

Bed bugs are especially fertile, with one female bug capable of producing 300 adults and 1,000 new eggs in just three months.

Even though they can’t fly, they move quickly, able to cover up to 100 feet an hour.

They can quickly spread not just from room to room but to surrounding areas too, such as neighboring apartment units.

(Learn how to stop them from invading your apartment in this article.) 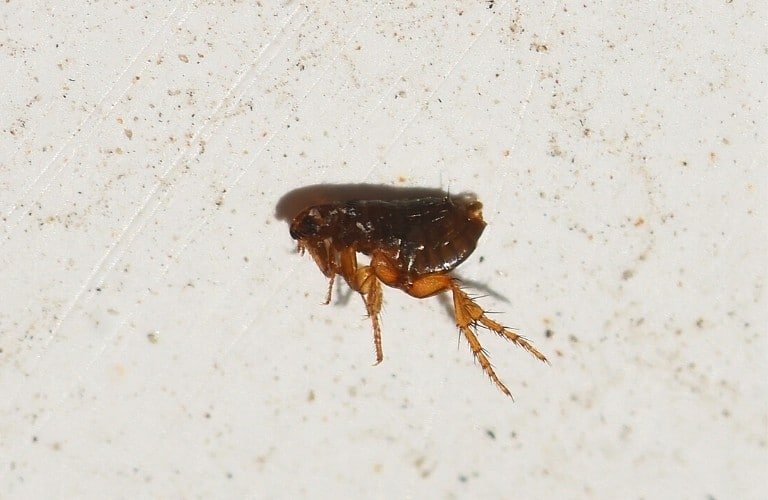 Fleas are also parasitic insects. In addition to mammals, however, fleas can use birds as their host.

Though they cannot fly and do not have wings, fleas are incredible jumpers, able to leap up to 50 times their body length.

About half the size of bed bugs, fleas grow to about 3 millimeters in length. They are also brown colored.

Their bodies are flat, enabling them to traverse their host’s fur or feathers. Fleas grasp on to their host’s skin with strong claws so they do not get dislodged.

Fleas are able to withstand incredible pressure due to their compressed size and hard bodies. This makes them resistant to scratching from animals trying to get rid of them.

Not entirely species specific, fleas can transfer between similar hosts, but they normally specialize in one group or type.

Because of this species switching, flea bites are more dangerous than bed bug bites, as they are more likely to carry illness.

Fleas have been found to carry typhus and bubonic plague between species.

Visit our numerous flea articles to learn more about these annoying, invasive bugs and what you can do to eliminate an infestation.

Want a sneak peak at one of the most effective elimination options? Carpet powders containing mostly natural ingredients, like boric acid, are highly effective solutions.

This carpet powder for fleas contains enough to treat approximately five rooms, is odorless, and leaves behind sufficient powder after vacuuming to remain effective residually. 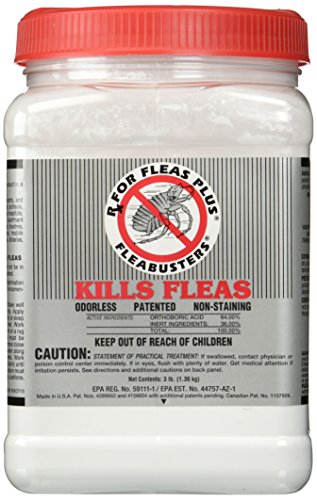 Because these two bugs look so similar and have similar habits, it is often difficult to tell which one should be the focus of prevention.

One distinction between the two bugs is how they break the skin of their host. Bed bugs have mouthparts that saw the skin, while fleas pierce the skin directly.

Looking closely at the bites could help determine which parasite has used you as a food source.

Oftentimes, people who have been bitten by bed bugs will not feel the bite until hours later.

This is because bed bugs inject their host with an anesthetic and anticoagulant to dull the pain and stop the bleeding.

Often, the bites will appear as red welts that itch the day after the bite occurs. If enough bites occur, bed bugs will sometimes produce a rash on the skin.

Look for the following signs of bed bug bites:

Flea bites typically occur on the lower part of the body, unlike bed bug bites which are usually on the upper body.

You might also notice flea bites in the creases of the body, such as elbows, armpits, waistline, backs of knees, or ankles.

Because fleas do not produce the anesthetic and anticoagulants that bed bugs do and because they do not necessarily bite at night, you are more likely to feel a flea bite almost immediately.

Look for the following signs of flea bites:

How Do I Know if I Have Bed Bugs?

As previously mentioned, bed bugs are tiny, crafty bugs that can hide almost anywhere. If you think you might have a bed bug infestation, look for these signs:

Look for these common signs in the following areas:

How Do I Know if I Have Fleas?

Fleas will typically stick to pets and animals for food but might use humans if they run out of options.

Because fleas are generally only passed on to humans by pets, this is one of the first ways to determine if you are facing bed bugs or fleas.

If you do not have animals at your home, then the pests you’re dealing with are likely bed bugs.

Because fleas are not as concerned with hiding as bed bugs are, they are often easier to spot. Their tendency toward jumping also makes them easier to notice.

If you have pets at home or have spent time at a home with pets, here are some signs you might have fleas:

If your pets are suffering from a flea infestation, there are many over-the-counter options available, or you can take them to a reputable vet who can take care of the problem.

One of the best ways to decide whether or not your problem is bed bugs or fleas is to check your pets.

If you don’t have pets or they don’t have fleas, you probably have bed bugs.

If you’ve been bitten by something but didn’t realize it until later, you’ve probably been attacked by bed bugs and their anesthetic and anticoagulant injection.

If you felt the bite immediately, you’ve likely been bitten by a flea.

Lastly, look at the layout of the bites. If they are in a line, it is probably bed bugs. If the bites are in a cluster or group, fleas are your culprit.

Bed bugs in the home are a more common problem than many people realize or care to admit.

However, once you are aware of their presence, you’ll want to take steps right away to eradicate the problem so that you can enjoy a restful night’s sleep again without worrying about functioning as a smorgasbord while you sleep.

Click here for information on preventing a bed bug infestation and on dealing with an existing problem successfully.