What Are the Different Types of Stink Bugs? How Many Are There? 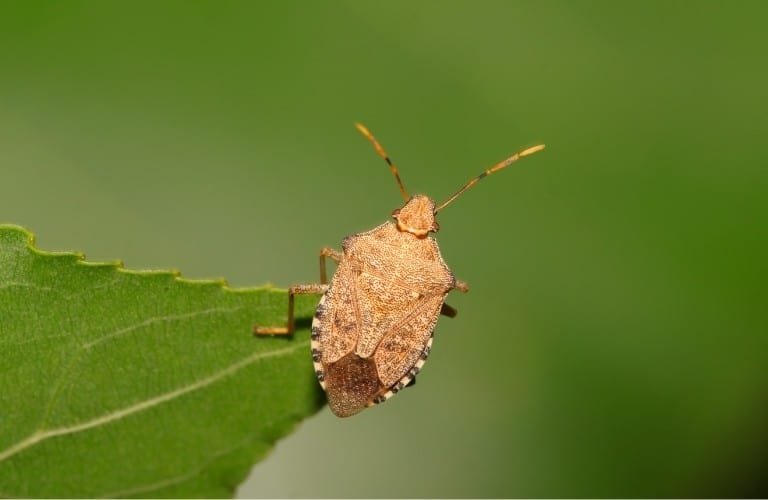 What are the different types of stink bugs? There are nearly 5,000 species of stink bugs in the world. Stink bugs are easily identifiable because of their shield-shaped bodies. Their colors can vary but are usually earth tones like green, brown, or gray. They release a foul odor when squished.

In the following, we’ll show you some of the most common stink bugs so you can get an idea of what to look for in case you stumble upon one in your garden.

Don’t miss out on important prevention and elimination tips! See all of our stink bug articles here.

How to Identify a Stink Bug

With thousands of stink bugs in the world, you might think it’s impossible to pick them out. Luckily, that’s not the case.

No matter where in the world stink bugs may be or what color they are, they’re typically recognizable just by looking at them.

Stink bugs are frequently called shield bugs because their bodies are shaped like a shield. Both ends of their body come to a rounded point.

The middle of their body is a rectangle shape that flares outward at the top before it makes a triangular shape toward the head.

There’s some variation to this shape between species. Some bugs can be more rounded on the lower end, more triangular around the head, or don’t have the flared points in the “shoulder” area.

The most common colors for stink bugs are green, brown, and gray. They can also be red, orange, yellow, or black.

Stink bugs aren’t always just one color. You can expect to see several colors on most bugs. Combinations of brown and green or brown and gray are the most common.

Stink bug eggs are easy to spot regardless of species. They’re usually shaped like a barrel – an oval shape with flat ends.

Occasionally the eggs might look more like a sphere than a barrel. Head over to this article to learn where you are most likely to find the eggs so you can destroy them on sight.

The smell of stink bugs has been described in many ways. The odor is most commonly described as resembling cilantro, skunks, or burnt tires.

The scent can be also be described as woody, dusty, or earthy. Others say the smell is not offensive at all but is rather sweet and reminiscent of apples.

The stench can vary across species. How the odor is released is also dependent on species.

It’s typically released when they’re squished, but some species are capable of spraying the odor when they feel they’re in danger.

If you spot a stink bug and aren’t sure what kind it is, be careful around it so you don’t get sprayed.

What to Do If You Have Stink Bugs

Stink bugs are agricultural pests that can destroy crops on both large farms and small gardens.

Of course, it’s best if you can prevent infestations before they occur, and we have a complete prevention guide here to show you how.

However, if you see stink bugs, regardless of what type, you can try the following:

You can use natural removal methods to get stink bugs off your plants. Many people just pick them off by hand and drop them into soapy water.

Others prefer to liberally spray plants with an organic neem oil, like this one, or apply diatomaceous earth to the plants and surrounding soil.

Pesticides can kill your plants and be dangerous to use, but they can be effective for killing stink bugs.

Although many people prefer to have an exterminator deal with their insect issues and pesticides, you can apply pesticides yourself if you feel comfortable doing so.

Learn what the pros use here.

Apply pesticides in areas where you see stink bugs appear the most, but keep the chemicals away from plants, pets, and people.

Visit this article to see which pesticide sprays will be most effective in your battle against stink bugs and to learn about more natural alternatives that won’t harm your plants.

You can catch adult bugs by using light to attract them to a pan of soapy water. You can use this method indoors and outdoors, and it’s quite effective.

Sticky traps are available to purchase, and these are also effective.

The Bug Beater Stink Bug Traps are particularly effective as they are designed for the sole purpose of attracting and catching stink bugs.

Let’s take a look at some of the most common stink bugs. There are thousands of different species, so these are only the most notable. 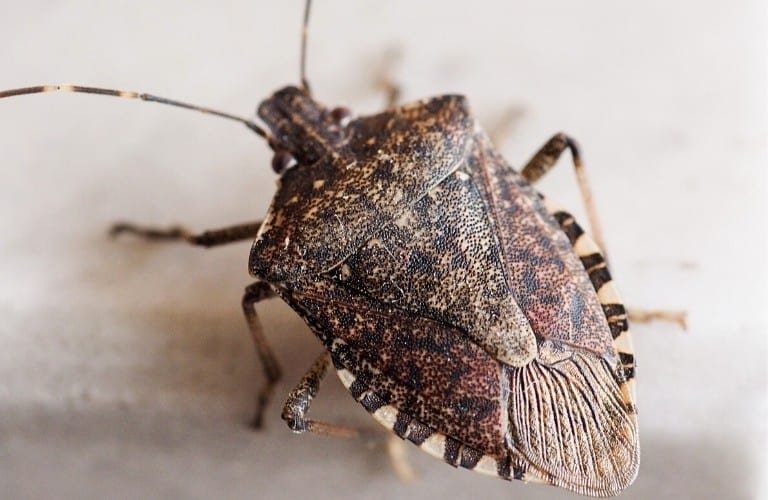 This stink bug is speckled with orange, brown, and gray and has red eyes. It’s native to Asian countries but was introduced to North America in the 1990s by accident.

It’s assumed that they hitched a ride in a shipment of produce. They were first reported in Pennsylvania in 1998, and now they can be found in almost every state in the United States.

They like to feed on the juices of fruits, so they’re frequently found in crop fields and fruit orchards. They can also be found in backyard gardens or wherever else their food is grown. 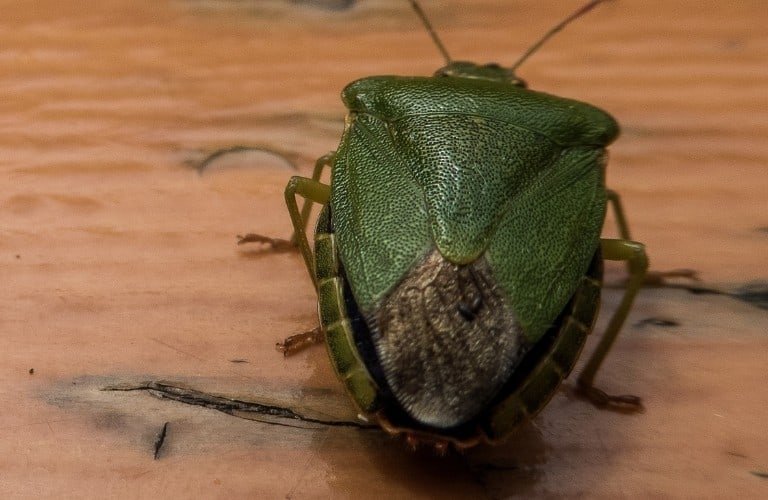 The green shield bug is a dark green that’s speckled with black and brown. These bugs are most commonly found in Europe.

The name might get confused with the southern green stink bug (Nezara viridula), mentioned below. Green shield bugs can be found on almost any plant and are frequently pests in gardens. 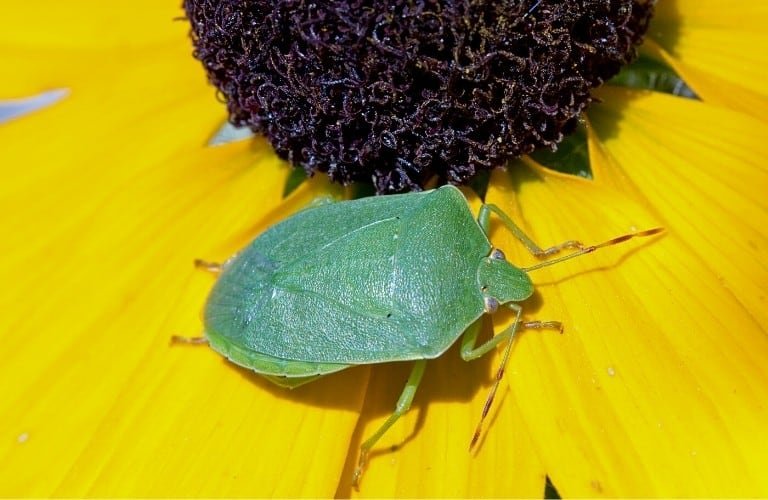 The southern green stink bug is a bright green color. It has speckles of yellow and brown, but from afar it will look like it’s solid green.

The bug is assumed to be from Ethiopia but is now found in most countries. Many of them die in cold temperatures, so their presence is more noticeable in tropical areas.

They prefer to feed on legumes and are a common pest on these crops. 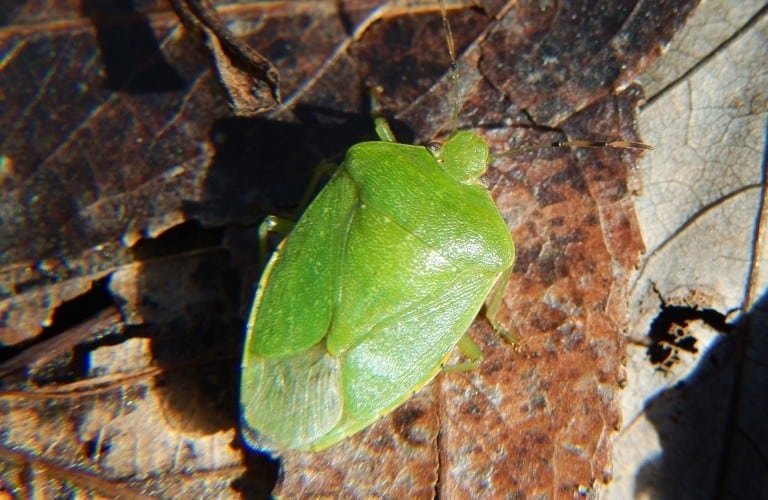 You can tell them apart based on their location and life cycle patterns, however.

The green stink bug mates in October before finding shelter for the winter.

They live in North America and in parts of Australia and prefer to feed on beans, peas, cotton, tomatoes, corn, and eggplants.

They can also be found on some fruits, but they don’t seem to be as destructive to those. 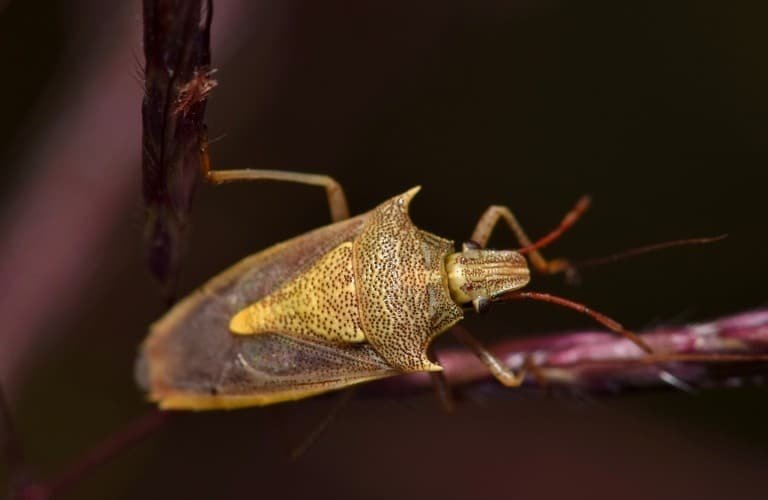 The rice stink bug is native to North America and a major pest in the southern United States.

The bug is a solid orange brown with specks of dark brown or black. It’s body is longer and slimmer than most types of stink bugs.

The bug feeds on rice and other cereal grains and grasses, like wheat or barnyard grass. Corn seedlings are at risk, but they won’t feed on mature corn. 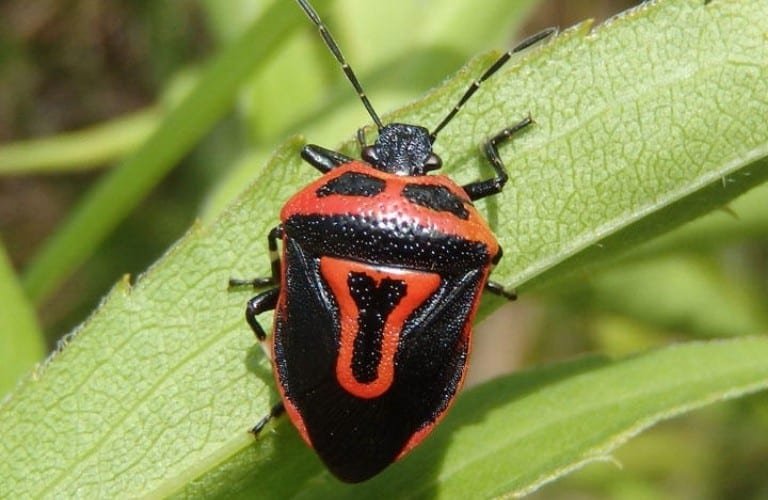 The two-spotted stink bug is predominately black with red areas. It might be confused with a ladybug at first glance because of the black spots and slightly rounded body. 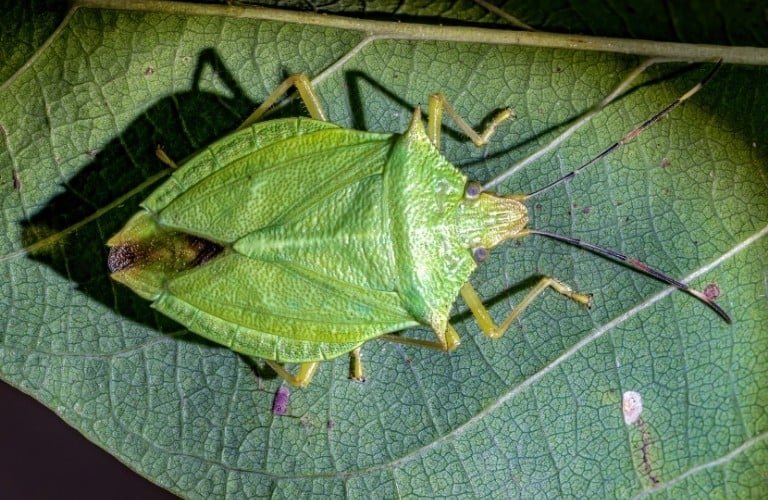 The spiny shield bug, also called the spiked shield bug, has been found in several places around the world including North America, China, North Africa, and the British Isles.

They live in forests, gardens, and meadows that are full of flowers. They’re predominantly brown with orange and gray tones.

These bugs are different than the other because they’re carnivorous and prefer to feed on the larvae of caterpillars, beetles, leaf bugs, and aphids.

They can be somewhat of a beneficial insect to gardens, but they’ll feed on plants if there aren’t enough insects around. 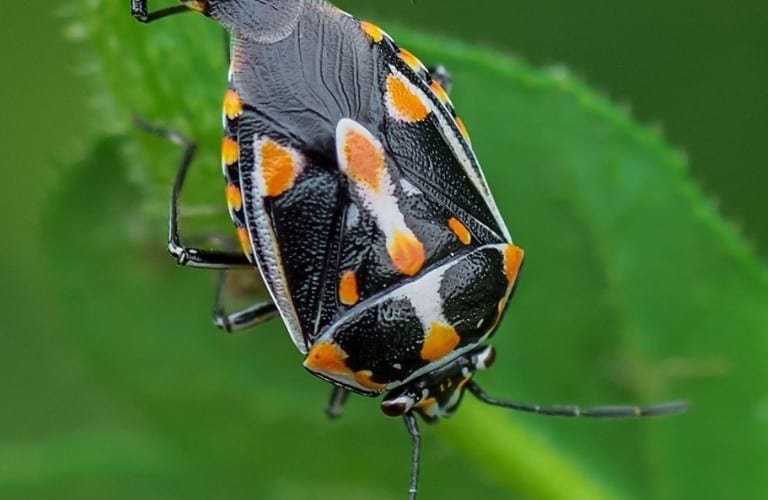 Also known as the painted bug, the bagrada bug is a fairly new pest to the United States. It was reported for the first time in 2008 but is native to Africa.

The bugs are black with tan and red spots. They’re mostly in California and Arizona and target cruciferous vegetables including cabbage, broccoli, kale, and cauliflower.

Stink bugs are a diverse family of insects. With so many species, they can be found in almost any climate on the earth.

Some prefer fruit, some prefer legumes, and others prefer to eat eggs and larvae. The two common characteristics they share are their shape and smell.

Their shape might differentiate a little, but it will always look somewhat like a shield. They’ll also always release an odor when squished, although some will do it when they feel threatened.