Do Hornets Make Honey? What Is Their Purpose In Life? 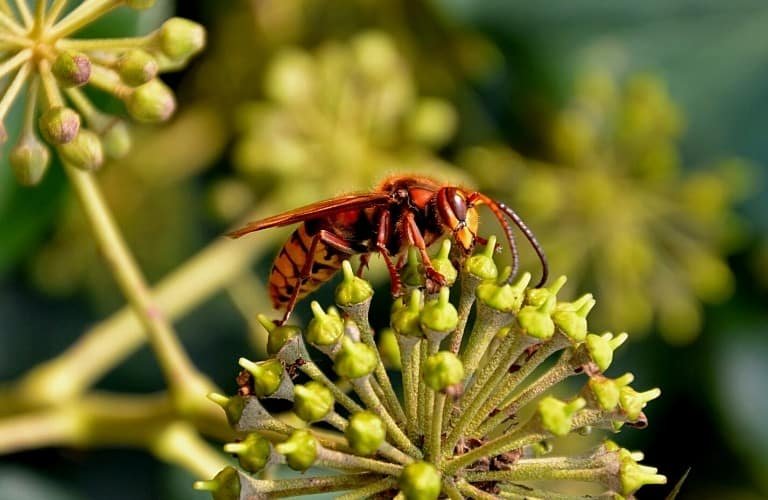 Hornets are known for being the angry cousins of honeybees. One step toward their nest will probably result in an attack.

It makes you wonder: what do they do inside that nest?

Do hornets make honey? Hornets do not make honey, but they do eat nectar from flowers and pollinate those flowers as they eat. Very few wasps make honey. The Mexican honey wasp is the most well known honey-making wasp, but the honey is hard to find and is considered a delicacy.

If hornets don’t make honey, what purpose do they serve?

Continue reading to learn what valuable jobs they perform, what they like to eat, and where they live so you can decide if they are worth keeping around or not.

Be sure to check out all of our hornet information and guidelines. Click here to learn all about hornets and the best ways to deal with them.

What Kind of Wasps DO Make Honey?

Hornets are a type of wasp, and some “hornets” like the bald-faced hornet don’t really qualify as a hornet.

Their family tree can be a bit confusing, but what’s even more confusing is there are a few types of wasps that do make honey.

The most prominent honey making wasp is the Mexican honey wasp (Brachygastra mellifica).

These wasps live in the northern parts of Panama and through Central America and stop at the southern parts of Arizona and Texas.

These wasps will pollinate a wide variety of flowers in order to make their honey.

They most commonly use mesquite trees and sunflowers to make their honey.

The honey and the wasps themselves are considered to be culinary delicacies in Mexico.

The wasps, larvae, and honey are collected shortly after the moon’s last quarter since the nests are usually full of honey around this time.

The wasps and larvae are cooked and eaten and can be served in many dishes, including tacos.

Do Hornets Have a Purpose?

Hornets may seem to be useless, especially since they don’t make honey or serve as a food source.

While they may not serve as the honeybees do, they do actually serve a purpose and don’t get as much credit as they deserve.

Hornets are a pest themselves, but they’re responsible for cutting down the population of several other pests, including:

Most of these pests are unwelcome guests in the home and garden.

If you have hornets in your area, you may notice a decreased presence in the listed pests.

Aphids, beetles, and caterpillars are known for chewing up gardens and ruining crops, while the spiders and flies are annoying for any homeowner.

A hornet’s sting can be lethal to those who are allergic, so you’ll want to get rid of them if that’s the case.

A foaming spray that will expand to cover a large area, like this spray with residual effects, are typically the best choice as they instantly immobilize hornets and kill quickly.

However, if the other pests are driving you crazy, hornets might be worth keeping around.

Hornets are pollinators too. They go from flower to flower collecting nectar because they like to eat it.

When compared to honeybees, hornets don’t really do much pollinating. Bees are hairy, which means they pick up a lot of pollen.

Hornets, on the other hand, have little to no hair on their body, so they pick up very little pollen.

However, their efforts don’t go unnoticed.

If the hornet population is higher in a specific area, those flowers will depend on their pollination if there aren’t other pollinators around.

Hornets are often feared as they can deliver painful stings with little provocation. Find the answers to common questions about this misunderstood pest here.

What Do Hornets Eat?

A hornet’s diet consists of two things: sugar and protein. They get these things from several different sources.

If you sit outside with a glass of lemonade or soda, don’t be surprised if you see a hornet in your beverage.

Hornets will go after any source of sugar they can find, including your drinks. If you take a drink outside, use a cup with a lid or cover it with plastic.

That means they’ll go after food they find on your plate and in trash cans too.

One of the best ways to prevent hornets is to keep trash cans cleaned and closed.

If you see a lid open or a hole in the can, cover it as soon as possible.

Hornets also get their sugar content from plants. The nectar in flowers and sap from trees also satisfy their sweet tooth.

Hornets get their protein intake from the insects that were mentioned earlier.

They hunt down these insects around the plants they collect nectar from.

They usually don’t stray too far from the nest, so they’ll take whatever is closest to them.

In DIY traps, it’s often recommended to use a piece of raw meat as an attractant. They’ll happily go after the meat for protein.

If you’re grilling steaks or burgers outside, keep the meat covered at all times if there’s a possibility of hornets being around.

If you’re starting to develop sympathy toward hornets, that’s great!

But keep in mind that they do go after bees, which are one of the world’s most important pollinators.

Beehives hold the sweet stuff that hornets crave, and the bees themselves serve as a source of protein.

One hornet is capable of killing 40 bees in just one minute, so it doesn’t take long for a nest of hornets to wipe out a hive of bees.

If you don’t have bees in the area, it’s probably safe to keep the hornets around.

However, if you have bees and hornets, you may need to consider getting rid of the hornets in an effort to save the bees, especially if you notice the bee population dwindling.

There are several different types of sprays available, including all-natural options, for getting rid of hornets and their nests.

We spent hours evaluating the options and narrowed it down to the safest, most effective sprays here.

Where Do Hornets Live?

Hornets are mostly found in the Northern Hemisphere, despite the fact that they can’t survive in cold temperatures.

The European hornet is the most common hornet that can be found in most places that have hornets.

Most areas in the United States have European hornets, except for the Western States.

Hornets will build their nests in high places in trees, eaves, attics, and the siding of houses.

They’re territorial and don’t like to build nests near other hornet colonies. They also won’t occupy existing nests.

In the winter, the queen hibernates outside the nest and the rest of the colony dies.

So, as a form of pest control, you can leave abandoned nests where they are since they won’t be reused and other hornets won’t build near them.

During the winter, the queen hornets will hibernate in hidden areas such as fallen logs, the bark of trees, or in areas with piles of leaves or lots of shrubs.

In the spring, the queen will emerge from her hiding place and begin to look for a suitable area to build a nest and begin a new colony.

Should Hornets Be Preserved or Eliminated?

Most people see hornets as evil pests, but whether you choose to keep or kill them is up to you.

Consider keeping hornets around if:

If hornets are disrupting your daily life, it’s probably best to get rid of them. We provide you with several options for elimination in this article.

Hornets don’t make honey, but some wasp types, such as the Mexican honey wasp, do make honey.

Hornets are responsible for population control of caterpillars, spiders, aphids, and other pests as well as pollinating flowers.

However, they don’t pollinate as well as bees and can be lethal to people who are allergic to hornet venom.