What Do Fruit Flies Look Like? Pictures & Tips To Spot Them 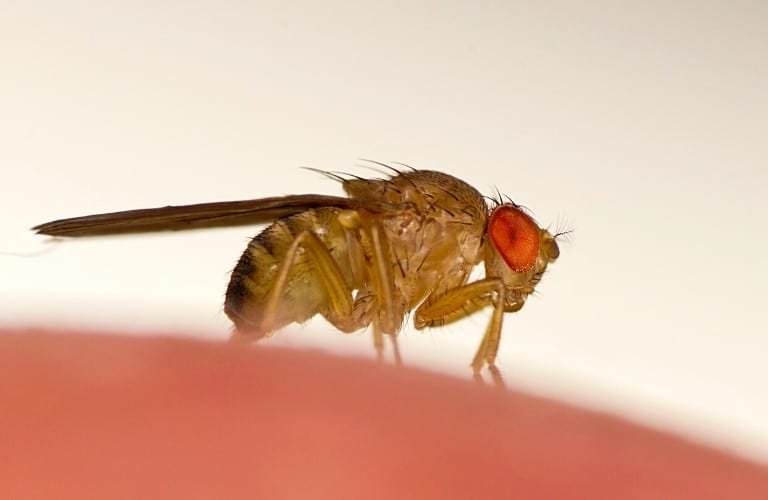 Occasionally, you might notice a little pest – or several – hanging around your fruit bowl.

It’s most likely a fruit fly, which is a tiny fly that loves the smell of fruit. Fruit flies are frequently mistaken for gnats.

Let’s take a closer look at each fly. Knowing where they like to hang out in your home will help you quickly identify fruit flies.

The common fruit fly is also called a vinegar fly.

These flies are usually what you’ll find around the browning bananas hanging in your kitchen, and they’re also drawn to apple cider vinegar, which is likely how they got the name.

When you spot one of these flies in your kitchen, it will look like a dark little dot flying around, but up close, they’re yellowish brown and have big, red eyes.

You likely won’t be able to see their eyes because they are so active when you approach. Plus, they’re super tiny.

Females are typically 2.5 millimeters long, and males are usually much smaller.

If you’re able to observe them up close, you’ll notice that the males are a darker color and have a black spot on their abdomen. 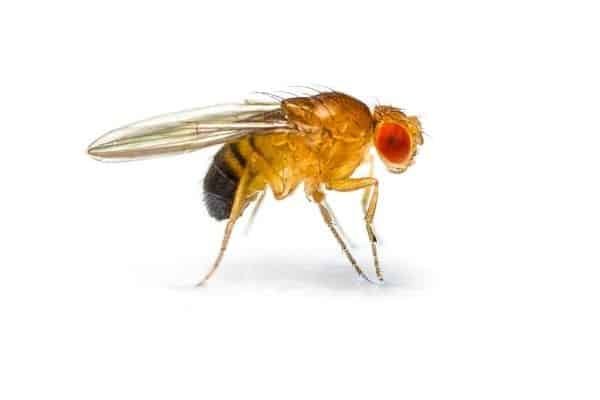 How You Attract Them

Ripening or rotting fruit is irresistible to these little flies. They also love fermented beverages, including beer and wine.

If you have fruit flies in your home, it’s possible they came home with your groceries because they can sometimes be in grocery stores or farmers’ markets.

They also like to breed in drains and trash cans. So, if you didn’t pick some up at the store, they probably found their way into your home on their own.

Where You’ll Find Them

If you left a bottle of wine or beer open, you might find them flying around that, too.

Check your kitchen sink and other nearby drains to see if that’s where they’re hiding.

Fruit flies are commonly mistaken for gnats, but one way of being certain it’s not a gnat is by checking your houseplants.

Gnats like to live in the moist soil of houseplants, so if you don’t see any bugs crawling in the dirt or flying around your plant, it’s most likely just a fruit fly.

Sometimes people mistake fruit flies for baby house flies (see how to get rid of them here), although the two behave quite differently.

Although they’re annoying, the common fruit fly doesn’t cause any harm. They can’t transmit diseases to humans, and they don’t cause fruits to rot.

These fruit flies seek out fruit that is already in the process of spoiling, instead of seeking out perfectly healthy fruit, like their medfly cousins like to do.

If they’re driving you crazy, there are preventative steps you can take as well as natural DIY traps you can make to catch them, both of which will be discussed in a bit, but rest assured, they won’t hurt you or your food.

The Mediterranean fruit fly, or the medfly, is unlike the common fruit fly in several ways.

First off, they’re more common in parts of Africa, Central and South America, and parts of Europe, but the United States has had her fair share of infestations.

They’re destructive flies that like to eat up crops, so they’re more of a problem for farmers than for homeowners.

The medfly is slightly bigger than fruit flies at a typical length of 3 to 5 millimeters long. They’re a yellowish color with two white bands and black spots.

Their bodies are rounded with triangular wings. If you live in an area with both common fruit flies and medflies, you’ll easily be able to tell them apart if you’re able to get a close look at their bodies. 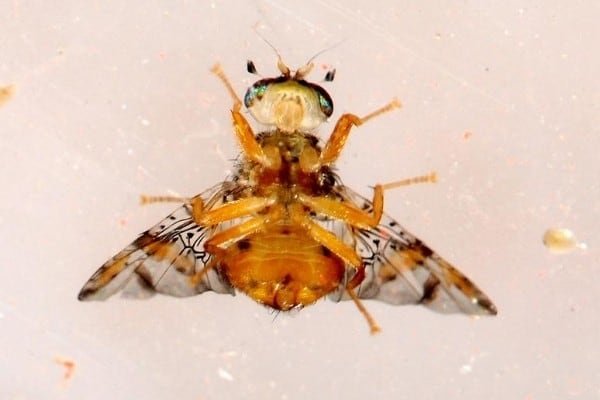 How You Attract Them

Medflies need plenty of nutrition to survive, so they prefer to eat the fruit that will provide it.

Pears, apples, oranges, grapefruits, mangos, and a long list of other fruits are ideal for medflies to eat.

Fruits are definitely how you attract this type of fruit fly, but you’re less likely to find them in your home.

They’re more often in fields of crops than in homes, but you can easily bring them home from the grocery store.

Where You’ll Find Them

Medflies lay their eggs under the skin of fruits, and the eggs hatch in just a few days.

Depending on where your grocery store gets their produce from, it’s possible to bring home fruit that has unhatched eggs.

This map, last updated in 2013, shows where medflies are known to live. They’re pretty much absent in the northern parts of the world.

They’re not too common in the United States, with the exception of the southernmost states.

Yes. Medflies are responsible for ruining crops and causing farmers to lose money. In worst-case scenarios, they can disrupt the production of food.

They cause infestations that end up being huge problems that are difficult to control. In California, it’s illegal to knowingly bring medflies into the state thanks to the California medfly attack in 1989.

How to Get Rid of Fruit Flies

You can get rid of fruit flies with natural methods so you don’t have to use harmful pesticides. Here are a few tactics you can use.

The common fruit fly is called a vinegar fly for a reason. They’ll come buzzing toward a DIY trap of apple cider vinegar in no time.

To make this trap, get a bowl or a cup and pour in some apple cider vinegar. You only need about an inch of liquid. Add a few drops of dish soap and stir it together.

If you’d like, you can cover the top with plastic wrap and poke a few holes. Secure it into place with a rubber band.

If you use a mason jar, you can use the screw band part of the lid to secure the wrap into place. The vinegar will attract them, and the soap will make it difficult for them to get out.

If you don’t like the idea of a bowl of dead flies sitting out on your counter, the RSVP Endurance Fruit Fly Trap is a stylish way to trap and kill pests.

Best of all, it’s dishwasher safe, so you can easily sanitize it after you rinse it out. 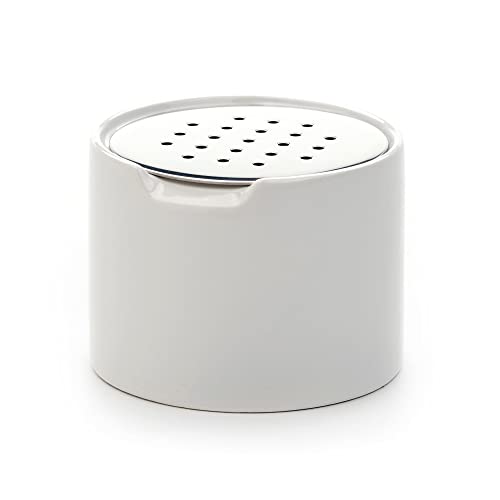 Grab a stale bottle of wine or beer and leave it sitting out with the top off of it. It will work in the same way as the apple cider vinegar trap.

Fruit flies love the fermented beverages, and the long neck of the bottle will make it almost impossible for them to find their way out.

Just be sure to leave a note that makes it clear that the beverage isn’t meant for drinking!

Note that as a bonus, you may wind up catching a few house flies with this method as well. Other methods of trapping pesky house flies can be found in this article.

Wash your fruit the minute you bring it into your home. Since fruit flies and medflies like it so much, it’s quite possible they’ll hitch a ride on it.

A simple rinse will do, but you can also use a water and vinegar mix, too. You’ll need to rinse the vinegar off immediately so it doesn’t linger.

Fruit flies are easy to identify once you know what you’re looking for.

The common fruit fly is browner in color and is often found flying around rotting fruit.

The Mediterranean fruit fly is lighter in color and bigger than the common fruit fly and likes to lay its eggs inside fresh fruit.

Wash your fruit when you bring it home and before you eat it as a preventative measure, and make apple cider vinegar traps to catch the ones flying around your home.

Be sure to visit our fly section for more helpful information, useful tips, and trap recommendations for dealing with common problems.