Why Do Gnats Fly Around Your Head? This Is What Attracts Them 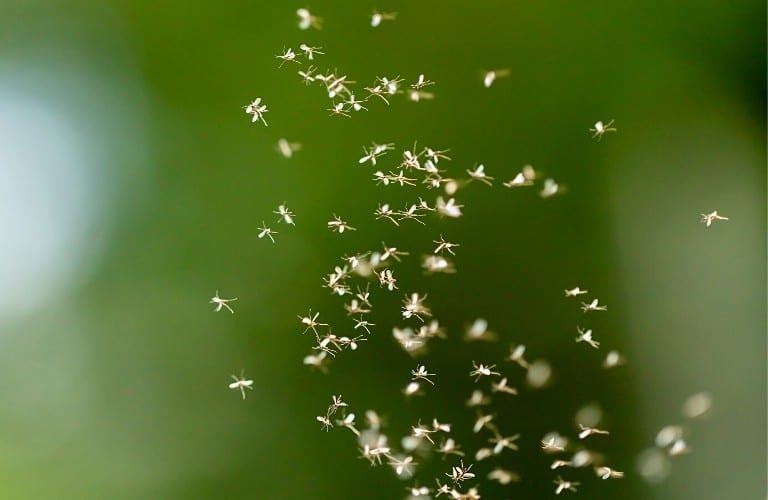 There are not too many things more annoying than gnats flying around your head.

They fly into your mouth, ears, nose, and eyes no matter how many times you try to swat them away.

They are nothing if not persistent, but is there a reason they hone in on you and refuse to leave you alone, or are they just annoying by nature?

Why do gnats fly around your head? Gnats are attracted to the carbon dioxide in your breath, sweet-smelling body products, sweat, and most of all, the moisture produced by the membranes of your nose and eyes. To keep gnats away, stay cool and dry, don’t use sweet scents, and wear repellents.

Don’t let the presence of gnats keep you from enjoying the outdoors.

Learn what attracts them to you in the first place, and take steps to repel them. In the following, we’ll show you how.

“Gnats” is actually a catch-all term to refer to many species of tiny, flying, pesky bugs. Be sure to read all of our gnat articles to learn how to deal with these annoying insects.

The single biggest source of attraction for gnats is moisture. They seek it out as this is the most favorable condition for them to live and more importantly, to reproduce.

(Unfortunately, gnats are attracted to many sources you ordinarily wouldn’t think twice about. Learn more here.)

Female gnats lay hundreds of eggs only in moist areas, whether in the overly watered soil of a houseplant or a soft, moist, overripe piece of fruit on the kitchen counter.

(Ever wonder how they are getting into your house? Find out here.)

The thing about gnats is that they are not discriminating when it comes to the source of the moisture.

Want to know how to rid your home and yard of these annoying bugs? Check out this article.

If you’re trying to avoid gnats, whether inside or outside, here are some areas to stay away from and conditions to correct:

Outside Areas to Avoid or Fix

Inside Areas to Avoid or Fix

Fun Fact: Most indoor traps, like these whimsical sticky traps, used to catch fungus gnats in houseplants are bright yellow because it is the color they are most attracted to.

If you already have a major gnat problem on your hands, you need a fast solution.

Head over to our article, “Best Gnat Traps and Sprays” to find a product that will rapidly eliminate gnats from your home and yard.

Gnats Are Attracted to Body Fluids

Because gnats will go after moisture wherever they can find it, moisture found on people and pets is no exception.

Due to the fact that body fluids contain moisture, in addition to giving off an odor and in some cases producing salt, gnats are attracted to the body fluids of people, pets, and even cattle.

The reason gnats show up in large groups and swarm around your head is because they are social insects.

For gnats, seeking out body fluids is considered a social or group activity. Aren’t you glad you’re not a gnat?

Gnats are attracted to the mucous membranes found around the eyes and the tear ducts.

They are attracted to the moisture in your eyes and the salt in your tears.

This may be especially trying during allergy season when eyes tend to water.

Another source of gnat attraction to your eyes is known as lacrimal secretion, which is a saline fluid produced by the lacrimal glands.

The purpose of lacrimal secretion is to keep the surface of the eyeballs well lubricated.

Gnats have been known to promote conjunctivitis (pink eye) in humans because their feet can transmit enough bacteria from an infected person to pass it on to you.

Female biting gnats, such as buffalo gnats and sand gnats, wreak havoc on the eyes and noses of cattle left standing outside for most of the day.

(Read more about biting gnats and how to avoid them in this article here.)

Typically, humans encounter the nonbiting gnats, like the fungus or eye gnats, which are simply annoying and not dangerous.

Gnats are also attracted to the membranes of the nose. Most of the time, the inside of your nose is moist to prevent bloody noses due to dryness and keep bad bacteria at bay.

Gnats are attracted to the moist membranes in your nose and anything that drains out of it.

Any gnats that happen to fly up the nose can generally be expelled by blowing your nose.

How to Stop Body Fluids From Attracting Gnats

If a gnat gets stuck in your eye, fold a tissue into a triangle, look up, then carefully and gently swipe it to the corner of your eye.

Unfold the tissue and wipe the gnat from your eye, eyelashes, or skin around the eye.

It is also possible for gnats to fly up your nose. If you don’t catch it as it goes up into the nasal cavity, there’s not much you can do to remove it other than blowing it out.

Aside from slight discomfort and possibly sneezing, a gnat flying up your nose poses no serious health threats.

It is remotely possible for a female gnat to lay eggs inside your nasal cavity, however, chances are they won’t. Female fungus gnats prefer moist soil to hatch their young.

When you are overheated, you sweat. The moisture in your sweat attracts gnats like crazy, which is why they can’t seem to leave you alone on a hot, humid summer day.

Gnats will start at the highest point of your body, the face and head, and work their way down.

They will fly around your armpits, chest, legs and feet. Whatever areas of your body that perspire or produce sweat are prime targets for gnats.

Some gnats are attracted to the heat of your body versus actual sweat.

Another rather disgusting thing that attracts gnats is body odor.

They are drawn to the scent of body odor, which in most cases is generated from a fair amount of sweat.

Gnats fly around your head if your hair gets sweaty and stinky.

Gnats are also very attracted to the smell of earwax, which explains why they often seem bent on zooming right into your ears.

Gnats cannot resist the smell of moist, salty sweat and often show up in swarms going after the moisture your body produces.

Gnats are most active during the day, which is when the temperatures are at a peak high.

If you’re outdoors on a hot, sticky day, the salt, odor, and moisture produced by your body will attract swarms of gnats.

How to Prevent Sweat From Attracting Gnats

*Keep in mind that pulling sweaty clothes over your head while changing will transfer the sweaty smell to your hair and body even if your fresh clothes are clean and dry. Take a shower if possible, or at least clean up with a cleansing wipe.

Breath Is a Major Attractant

One of the biggest reasons gnats fly around your head is because of your breath.

Gnats are attracted to the carbon dioxide in our breath produced naturally as we exhale.

Gnats have been known to fly right into the mouth, which might be more of a threat for a runner who’s likely exhaling, sweating, and mouth breathing a lot.

In addition to the carbon dioxide generated from breathing, gnats are very attracted to bad breath.

Anything that smells bad or has a “rotting” smell to it is right up a gnat’s alley and causes them to draw closer to your face.

How to Stop Your Breath From Attracting Gnats

While it’s impossible to stop breathing to avoid a swarm of gnats around your face, wearing a mask can at least block their access to your mouth (and nose).

Wearing a mask will help decrease the level of carbon dioxide you’re putting out into the world, so gnats will be less likely to be drawn to your breath, and you won’t have to worry about them flying into your open mouth.

As for bad breath, sucking on sugar-free peppermints should do the trick since gnats are repelled by the smell.

In addition to staying as dry and cool as possible, here are some further pointers to keep gnats from flying around you and your head:

Don’t miss out on other important tips and techniques for getting rid of gnats in your yard and in your home. Click here for more!